In this tutorial, we'll analyze the technique to list all the classes loaded by a specific class loader in Java, using the Java Instrumentation API. We'll also see how to create and load a Java agent to acquire an Instrumentation instance and invoke the required methods to accomplish our task.

The class loaders are an integral part of the JRE (Java Runtime Environment). Their job is to dynamically load classes into the Java Virtual Machine. In other words, they load classes into memory on-demand when required by the application. The article on Java class loaders talks about their different types and provides a detailed understanding of how they work.

The Instrumentation interface provides the getInitiatedClasses(Classloader loader) method that can be invoked to return an array comprising all the classes loaded by the particular loader. Let's see how this works.

First, we need to create and load an agent to acquire an instance of the Instrumentation interface. A Java agent is a tool to instrument programs running on the JVM (Java Virtual Machine).

In other words, it can add or modify the bytecode of methods for the purpose of gathering data. We'll require an agent to get a handle on the Instrumentation instance and invoke the required method.

There are multiple ways to create and load an agent. In this tutorial, we'll use the static loading approach using the premain method and the -javaagent option.

To create a Java agent, we need to define the premain method to which the Instrumentation instance will be passed on agent load. Let's now create the ListLoadedClassesAgent class:

In addition to defining the agent, we'll define and expose a static method to return an array of loaded classes for a given class loader.

Note that if we pass a class loader with a null value to the getInitiatedClasses method, it returns the classes loaded by the bootstrap class loader.

Let's see the code in action:

Note that if we're using Java 9 or above, we can use the getPlatformClassLoader method. This will list the classes loaded by the Platform class loader. In that case, the switch case will also contain:

Now, let's create a manifest file, MANIFEST.MF, with appropriate attributes for our agent to run, including:

The complete list of manifest attributes for an agent JAR file is available on the official documentation of the java.lang.instrument package.

Next, let's statically load the Java agent and start our application:

After running the above command, we'll see the output:

In this tutorial, we learned about the technique to list all the classes loaded in a specific class loader.

As always, the complete source code of the example can be found over on GitHub.

In this article, we'll discuss in detail a core concept in Java – the lifecycle of a thread.

We'll use a quick illustrated diagram and, of course, practical code snippets to better understand these states during the thread execution.

To get started understanding Threads in Java, this article on creating a thread is a good place to start.

In the Java language, multithreading is driven by the core concept of a Thread. During their lifecycle, threads go through various states: 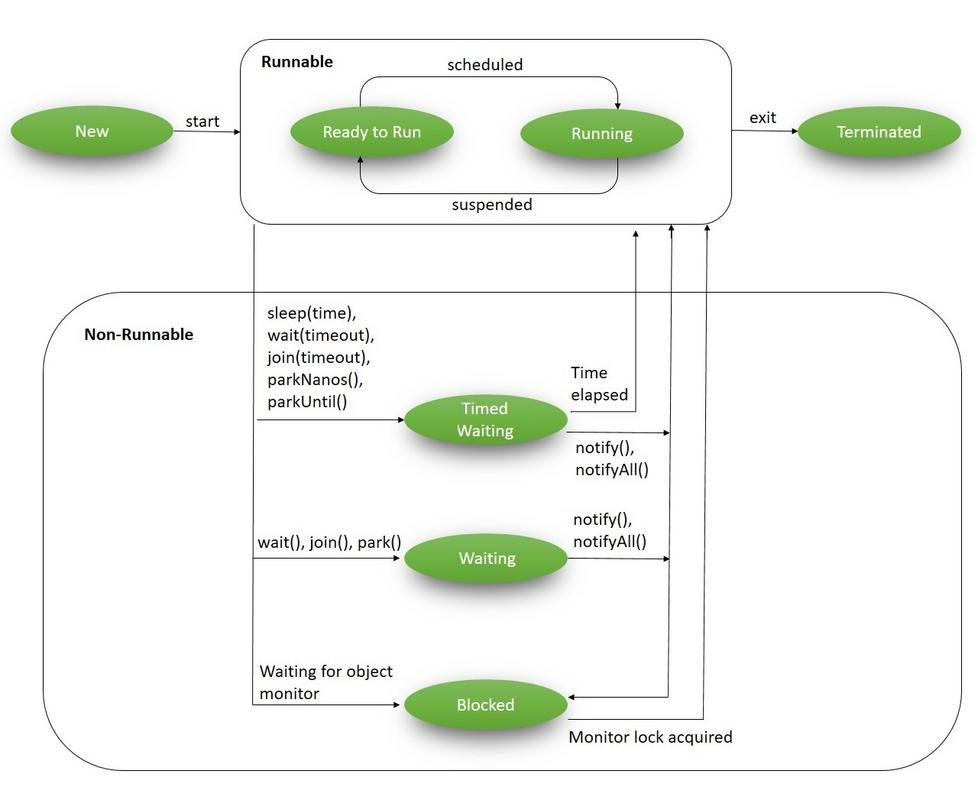 3. Life Cycle of a Thread in Java

The java.lang.Thread class contains a static State enum – which defines its potential states. During any given point of time, the thread can only be in one of these states:

All these states are covered in the diagram above; let's now discuss each of these in detail.

A NEW Thread (or a Born Thread) is a thread that's been created but not yet started. It remains in this state until we start it using the start() method.

Since we've not started the mentioned thread, the method t.getState() prints:

When we've created a new thread and called the start() method on that, it's moved from NEW to RUNNABLE state. Threads in this state are either running or ready to run, but they're waiting for resource allocation from the system.

In a multi-threaded environment, the Thread-Scheduler (which is part of JVM) allocates a fixed amount of time to each thread. So it runs for a particular amount of time, then relinquishes the control to other RUNNABLE threads.

For example, let's add t.start() method to our previous code and try to access its current state:

This code is most likely to return the output as:

Note that in this example, it's not always guaranteed that by the time our control reaches t.getState(), it will be still in the RUNNABLE state.

It may happen that it was immediately scheduled by the Thread-Scheduler and may finish execution. In such cases, we may get a different output.

A thread is in the BLOCKED state when it's currently not eligible to run. It enters this state when it is waiting for a monitor lock and is trying to access a section of code that is locked by some other thread.

Let's try to reproduce this state:

Being in this state, we call t2.getState() and get the output as:

A thread is in WAITING state when it's waiting for some other thread to perform a particular action. According to JavaDocs, any thread can enter this state by calling any one of the following three methods:

Note that in wait() and join() – we do not define any timeout period as that scenario is covered in the next section.

We have a separate tutorial that discusses in detail the use of wait(), notify() and notifyAll().

For now, let's try to reproduce this state:

The output here is, as you'd expect:

A thread is in TIMED_WAITING state when it's waiting for another thread to perform a particular action within a stipulated amount of time.

According to JavaDocs, there are five ways to put a thread on TIMED_WAITING state:

To read more about the differences between wait() and sleep() in Java, have a look at this dedicated article here.

For now, let's try to quickly reproduce this state:

Here, we've created and started a thread t1 which is entered into the sleep state with a timeout period of 5 seconds; the output will be:

This is the state of a dead thread. It's in the TERMINATED state when it has either finished execution or was terminated abnormally.

We have a dedicated article that discusses different ways of stopping the thread.

Let's try to achieve this state in the following example:

Here, while we've started thread t1, the very next statement Thread.sleep(1000) gives enough time for t1 to complete and so this program gives us the output as:

It returns false. Put simply, a thread is alive if and only if it has been started and has not yet died.

In this tutorial, we learned about the life-cycle of a thread in Java. We looked at all six states defined by Thread.State enum and reproduced them with quick examples.

Although the code snippets will give the same output in almost every machine, in some exceptional cases, we may get some different outputs as the exact behavior of Thread Scheduler cannot be determined.

And, as always, the code snippets used here are available on GitHub.

In this tutorial, we'll learn about the event support mechanism provided by the Spring framework. We'll explore the various built-in events provided by the framework and then see how to consume an event.

To learn about creating and publishing custom events, have a look at our previous tutorial here.

Spring has an eventing mechanism which is built around the ApplicationContext. It can be used to exchange information between different beans. We can make use of application events by listening for events and executing custom code.

For example, a scenario here would be to execute custom logic on the complete startup of the ApplicationContext.

In fact, there're a variety of built-in events in Spring, that lets a developer hook into the lifecycle of an application and the context and do some custom operation.

Even though we rarely use these events manually in an application, the framework uses it intensively within itself. Let's start by exploring various built-in events in Spring.

On either initializing or refreshing the ApplicationContext, Spring raises the ContextRefreshedEvent. Typically a refresh can get triggered multiple times as long as the context has not been closed.

Notice that, we can also have the event triggered manually by calling the refresh() method on the ConfigurableApplicationContext interface.

By calling the start() method on the ConfigurableApplicationContext, we trigger this event and start the ApplicationContext. As a matter of fact, the method is typically used to restart beans after an explicit stop. We can also use the method to deal components with no configuration for autostart.

Here, it's important to note that the call to start() is always explicit as opposed to refresh().

A ContextStoppedEvent is published when the ApplicationContext is stopped, by invoking the stop() method on the ConfigurableApplicationContext. As discussed earlier, we can restart a stopped event by using start() method.

A context reaches its end of life on closing it and hence we cannot restart it like in a ContextStoppedEvent.

Next, let us explore how to consume the published events. Starting from version 4.2, Spring supports an annotation-driven event listener – @Event Listener.

In particular, we can make use of this annotation to automatically register an Application Listener based on the signature of the method :

Significantly, @Event Listener is a core annotation and hence doesn't need any extra configuration. In fact, the existing context:annotation-driven/ element provides full support to it.

A method annotated with @Event Listener can return a non-void type. If the value returned is non-null, the eventing mechanism will publish a new event for it.

Now, there might arise situations where we will need our listener to consume multiple events.

For such a scenario, we can make use of classes attribute:

If we're using earlier versions of Spring (<4.2), we'll have to introduce a custom ApplicationEventListener and override the method onApplicationEvent to listen to an event.

In this article, we've explored the various built-in events in Spring. In addition, we've seen various ways to listen to the published events.

As always, the code snippets used in the article can be found over on Github.